As We Approach the Opening of the "Kariya Ekisai Gravestone Reception Commemoration: The Man and His Work" Exhibition 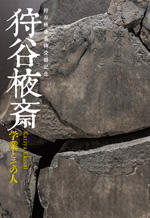 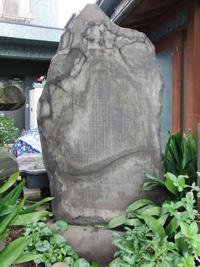 From Tuesday, November 28, 2017 to Saturday, January 20, 2018, the "Kariya Ekisai Gravestone Reception Commemoration: The Man and His Work" Exhibition will be held in the first-floor exhibition room at the Waseda Aizu Museum (Picture 1).

In 2012, the museum received Kariya Ekisai's gravestone as a gift thanks to the generosity of Ikkei Wada, the chief priest of Hofuku-ji Temple of the Soto school of Buddhism in Sugamo in Tokyo's Toshima Ward. Standing at over two meters tall, the size of the stone monument is impressive and has been a familiar fixture at the entrance of Hofuku-ji Temple for many years (Picture 2). Unfortunately, this monument collapsed during the Great East Japan Earthquake in 2011 and was destroyed. After three years of restoration work, we are finally unveiling it as part of this exhibition.

Kariya Ekisai (1775-1835) was, among other titles, known as a scholar of ancient Japanese literature, Chinese classics, and ancient Chinese texts, as well as a bibliographer and an epigraphist. He was a figure in the late Edo period who was known for his passionate curiosity and spirit of inquiry, which led him on various scholarly pursuits that were not limited to a single category. 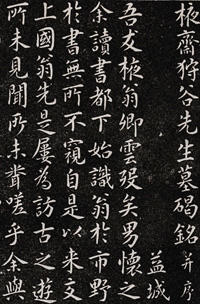 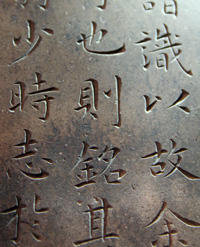 The formal name of Kariya Ekisai's grave stone is "Ekisai Kariya Sensei Boketsumei Narabinijo." This epitaph was written by Matsuzaki Kodo (1771-1844, Confucian scholar of the late Edo period), a like-minded contemporary who dedicated himself to scholarship together with Ekisai for 30 years.

Ekisai was bedridden due to illness in Summer 1835, and it was said that Kodo frequently visited him during that time. He passed away on July 4th that same year. As Kodo bid his final farewell, he wrote these words of grief in his journal: "I grasped his hand as night approached. I wept in silence. My heart is broken." The funeral service was held on July 7th at the Kotokuzan Tenryu-ji Temple at Shitaya, Asakusa. Kodo, who was asked by Ekisai's son, Chikayuki, to write the inscription on the gravestone, was convinced that no one knew Ekisai better than he did, and accepted the important task. As a testament to this conviction, the writing in the inscription is a dignified text that thoroughly conveys Ekisai's career, scholarship, and personal nature. The artist who was entrusted with recording the text was the renowned calligraphist Kojima Seisai (1796-1862), who was a disciple of Ekisai. In its meticulous attention to the slightest of details and the dignified appearance of the writing, the inscription exhibits the respect and admiration of a pupil to his late teacher (Picture 3). The inscription at the crown of the gravestone was written by the respected historian and physician Shibue Chusai (1805-1858).

One of the highlights of this exhibition is to see a stone monument, which are normally seen outdoors, in an indoor setting. The master craftsman who was entrusted with inscribing the letters into the gravestone was Hirose Gunkaku, a celebrated engraving artist of the Edo period. Even after 200 years since the gravestone was made, the conciseness of the engraving, the natural and smooth curves of the characters, and other striking features speak to the mastery of Hirose Gunkaku's craft. We invite visitors to closely observe how Kojima Seisai's careful and flowing brushwork is reproduced on the stone surface in breathtaking realism (Picture 4).

The gravestone of Kariya Ekisai is not simply an engraved text that records the life and work of the man himself. The superb composition, calligraphy, and engraving form the complete whole, embodying the cultural refinement of the time, with the respect and affection for Ekisai his friends harbored embedded in the work.

It is a well-known fact that Kariya Ekisai collected and extensively read vast amounts of Chinese and Japanese literary works. The results of this is demonstrated in full in his own work, which is widely praised for his citing of copious references. Ekisai used the pen name "Tannou." "Tan" refers to a type of insect that lives in books. He also called his library the "Jokan Shoin," using characters that mean "constantly closed." These names conjure images of Ekisai cutting himself off from interacting with the real world, immersed completely in the world of books. However, it is important to remember that he was also very enthusiastic about visiting temples, shrines, and ancient remains of various regions to see works of art and calligraphy, as well as antique vessels. In his epitaph, Kodo repeatedly emphasizes the fact that Ekisai's collection of antique vessels was not simply a reflection of his antiquarianism, but his way of verifying the content of literature through observations of antique objects.

One of the works written by Ekisai is titled Kokyo Ibun. This work is a record of the forms and descriptive texts of 30 epigraphs on stone and metal monuments from before the relocation of the capital to Heiankyo, or ancient Kyoto. The book contains a detailed dissection of these inscriptions. Although the book has undergone many revisions, the preface was written in 1818, which means that precisely 200 years have passed since Kokyo Ibun was composed. Since he was in his 20s, Ekisai had a deep curiosity for ancient inscriptions on monuments, and collected stone-rubbed copies. For some of these, he went on trips to see the actual inscriptions. This approach of considering his research into literary materials the most important factor in his work, in a time when ancient inscriptions were not as valued, was truly a groundbreaking effort. Even now, after 200 years have passed, Ekisai's sincere homage to prior works, his historical examination developed based on profound knowledge, and his style of presenting his arguments with clarity showcases the many merits of this book. Anyone who reads Kokyo Ibun can see Ekisai's pursuit of truth by personally observing the actual material with his own eyes, and comparing the knowledge he gained with the literary material. 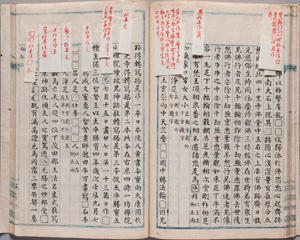 This approach is mirrored by the style of Aizu Yaichi (1881-1956), who also conducted research by using both literary works and actual physical material as two parts of a whole. Aizu, whose name we honor in the name of our museum, was a poet, calligrapher and art historian, and taught Oriental art history at this university. In researching art history, Aizu claimed that observing the actual artifacts is vital in education. He advocated this philosophy of learning through actual contact with the works of art being observed. It is clear that there is a common approach to the academic philosophies of Ekisai and Aizu. Aizu venerates Ekisai as "the most gifted scholar of ancient texts in the Edo period." There is even an existing piece of document (Picture 5) that suggests Ekisai is highly regarded by Aizu as a representative figure of bibliographical study in Edo period. In this copy of Kokyo Ibun, Aizu has placed many slips containing notes on every page, with the softened, worn pages testifying to his intensive reading. The notes on these slips show that Aizu had read multiple manuscripts for Kokyo Ibun, and made comparisons on the differences in text. This meticulous attention to detail in his examination and comparison also mirrors the style of Ekisai.

In this exhibition, many stone-rubbed copies that are contained in Kokyo Ibun are also displayed, including the Broken Stone in Uji Bridge, the Tagohi inscription, the Taga Castle inscription, the Nasukoku Zohi inscription, and the Buddha footprint at Yakushi-ji Temple. These copies can be observed in a new light while remembering Ekisai's research of history. The stone-rubbed copies displayed at this exhibition are part of the collection of Jun Kato (1907-2002), who was a student of Aizu and taught Japanese epigraphy and philology at this university. Kato, who was Aizu's best pupil, succeeded to Aizu's research of epigraphy and calligraphy and wrote important works himself. According to his students, Kato also passionately conducted field research, observing firsthand the epigraphs of various regions in Japan, calling himself a wanderer in pursuit of stone-rubbed copies of epigraphs.

In this exhibition, besides Kariya Ekisai's gravestone and materials related Kokyo Ibun, Ekisai's copy of Wamyo Ruijusho (an ancient Japanese dictionary of Chinese characters with extensively recorded notes in each line), two of Ekisai's work (of classic Japanese poetry and Chinese poetry), a letter addressed to Haruki Akimitsu (from Aizu Yaichi's collection), Ekisai's personal stamp (from Waseda University Library's Ichishima Syunjo stamp collection), and other exhibition pieces are also displayed. These are all valuable pieces of evidence that us to imagine what kind of person Ekisai was like.

I believe this exhibition will be an excellent opportunity for visitors to contemplate on Ekisai's life through his many works. I hope you enjoy the exhibition.

"As We Approach the Opening of the 'Kariya Ekisai Gravestone Reception Commemoration: The Man and His Work' Exhibition"

Sachi Tokuizumi graduated from the Doctoral Program at the Graduate School of Letters, Arts and Sciences, Waseda University. He assumed his current position in April 2016. He is an expert in the history of calligraphy during China's Northern and Southern dynasties period.