A variety of different TV dramas--ranging from its infancy through to the present day--were selected for exhibition entitled "Dreaming Media: TV Drama Exhibition" held in the Tsubouchi Memorial Theatre Museum of Waseda University (May 13 to August 6, 2017). With preparations for the exhibition having got underway about a year ago, one thing that I keenly realized was the lack of basic information about the early days of TV dramas.

Japanese television broadcasting began in 1953, and there is precious little information available about TV dramas produced before 1960. At that time, almost TV dramas were broadcast live and any video that might have existed usually disappeared soon after the program aired. The producers did not think to preserve these programs for future generations, and in most cases, the scripts, schedules and other related documents were disposed of immediately. There are, of course, some outstanding TV dramas from this time that are still talked about to this day. However, although the programs such as Frankie Sakai's Watashi wa Kai ni Naritai (I Want to Be a Shellfish, 1958) can still be viewed on DVD even today, these are an extremely rare case. KRT (now TBS) did not save any other dramas broadcasted in Sanyo TV Show (1958-1961) except for Watashi wa Kai ni Naritai and Irohanihoheto (Iroha, 1959), which won the Japan Art Festival Grand Prize. In other words, the TV dramas created during the early days of television that we can still watch and remember to this day are mainly dramas that have been already recognized as masterpiece at that time, while the ordinary TV dramas that were mass produced remain only as hazy memories in the minds of those who actually watched them at the time. 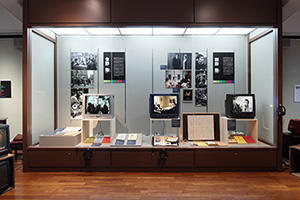 When faced with a situation such as this, what can we do to find out more about the early-day TV dramas? First of all, we can turn to TV drama scripts as a useful way of learning more. The Theatre Museum houses many television scripts from the early days of television, and these allow us to find out the plots of TV dramas as well as acquire basic information about the production staff and cast. However, a script cannot tell us everything about a TV drama. Some of the materials stored in the Theatre Museum include related documents (scrapbooks, still pictures, and scripts with notes written on them) that were donated by actors involved in the production process. Unfortunately, there are only a limited number of these documents, particularly those from the early period of television broadcasting.

The Imponderables of the Television

At this exhibition, a particularly important part of the section on the early days of TV dramas is the documents related to Ben Wada (1930-2011). Ben Wada was the popular NHK director of many acclaimed dramas, including Amagigoe (Crossing Amagi, 1978), Ashura no gotoku (Like Asura, 1979-1980), The Shosha (The Trading Company, 1980), Kemonomichi (Animal Trail, 1982) and many others. Having already directed many much-talked-about TV dramas in the 1950s, he was a leader figure in the early period of TV dramas. However, despite the popularity of Wada's works, very few videos from this period were preserved. In the 1950s, Wada created about 40 dramas, but the only two that remain are Ishi no Niwa (Rock Garden, 1957) and Nihon no Nisshoku (The Eclipse of Japan, 1959). Both of these dramas were created using Wada's highly acclaimed special close-up technique, and these two works were also exceptions in that they were recognized with the Arts Festival Grand Prize.

In an introduction to TV dramas from the early period of television, there is no way I could leave out Ben Wada, as I have great respect for him. Fortunately, We were able to borrow many valuable documents from his family for this exhibition. These documents included scrapbooks of articles about his works and scripts with detailed storyboards, all of which provide an outstanding record of his work and give visitors a rare glimpse of his creativity.

One of the documents that caught my attention was a production notebook entitled TV Drama: Saru no Koshikake Note (TV Drama: Pore Fungus Notebook). Airing on July 24, 1955, this TV drama depicted the lives of students and their teacher at a branch school in a small village near Mt. Koya. There is no record of this drama in the TV Drama Database, which is the most reliable website for information on Japanese TV dramas, and most people are unaware of its existence (I checked the newspaper TV guide, which indicated that the drama had probably been broadcasted). What surprised me most was the size of the notebook. This voluminous production notebook has a total of 656 pages and it includes extremely detailed handwritten notes about the staff and cast, location hunting, casting, meetings with music producers, and the preparation of sets and rehearsals for each sequence. As well as indicating that the first filming location ended up being cancelled and that two identical classroom sets were prepared, the notes also provide information on matters such as the positioning of rooms (classrooms and living rooms), the placement of doors, and the way the doors opened (which seemed to be important in determining the movement of the camera), etc. The details of the drama production were carefully considered. When I learned that these notes reflected the effort that Wada put into the creation of a TV drama that was on air from 6:00 pm for just 30 minutes, I was overwhelmed by the extraordinary passion for television he had.

The production notebook for Saru no Koshikake, private collection

Ben Wada wrote the following statement as a conclusion at the end of his production notebook: "The theatrical consideration for Saru no Koshikake: The start and its futility of television." This must be a memo made for his own records, and we might not be able to understand exactly what he meant by it. Nevertheless, it is extremely interesting that even with this voluminous record sitting in front of him, he felt a kind of futility. The production of movies and television is in itself illusionary and fictitious because it is not real. Early television images are doubly illusionary and fictitious, because it disappeared after it aired. Wada may have questioned himself many times about the meaning of his work during the recording of a huge amount of words. On many occasions, Wada speaks of television as being "fluid." What he meant by this is that television is not fixed as images recorded on film, and that it disappears with the passage of time. So, what made Wada so passionate about TV programs despite describing them as fluid, illusionary and fictitious? He spent approximately 3 months writing this production notebook after the broadcast of Saru no Koshikake. He must have had to try very hard to remember details of the program that would never be seen again. This conflict between remembering and forgetting in creation is expressed in this notebook, and his comments about feeling a sense of futility seem to have identified the true nature of the early days of TV dramas. Through these records of a director's intense battle in the face of this mysterious medium of television, we are also attempting to recall TV dramas that will never be seen again. This may well be a futile exercise, but I feel that we must keep this in mind as the source of the feeling hidden behind the origins of television.